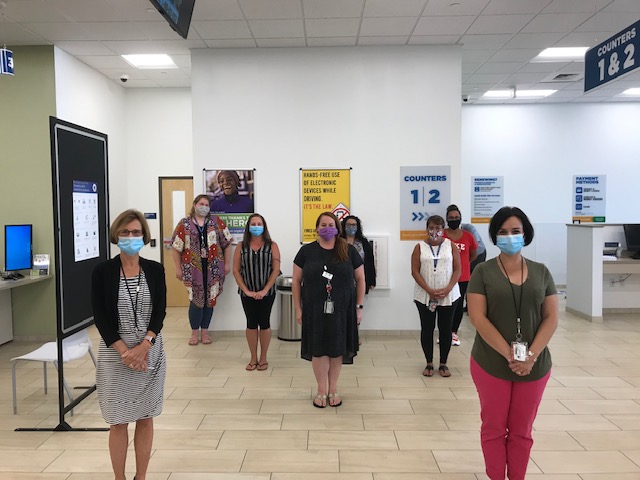 The RMV temporarily stopped administering road test exams during the pandemic due to safety concerns and to comply with state guidelines. State vehicles are still being used to conduct road test exams, sponsors are no longer allowed to accompany test takers in the vehicles, and additional cleaning and disinfecting protocols are in place.

Federal regulations due to the REAL ID law impact the options customers have when renewing their license or ID. If a customer chooses a REAL ID credential, they must complete their initial REAL ID transaction in-person at a Service Center or AAA location to meet federal documentation and image capture requirements.

The U.S. Department of Homeland Security has since revised its REAL ID compliance deadline to allow more time customers to obtain a REAL ID. Beginning May 3, 2023 customers will need to present a REAL ID or another n acceptable form of federal identification for certain federal purposes such as boarding domestic aircraft. More information on REAL ID requirements in Massachusetts is available at Mass.gov/ID: https://www.mass.gov/guides/massachusetts-identification-id-requirements

At the end of FY21, 31 percent of customers held a REAL ID. There has been a steady adoption of REAL IDs, and the FY21 performance exceeded the target of 25 percent.

Out of State Mail Processing

The out of state (OOS) mail measures track the performance of the out of state mail processing program which handles violations and citations of Massachusetts drivers from other states. Cases are processed within two queues: high priority and low priority.

In FY21, 99 percent of high priority out of state mail was processed within the next business day, exceeding the target of 90 percent.   This is an increase from 86 percent in FY20.

Low Priority: Percent of low priority OOS mail that has been processed within five business days

In FY21, 99 percent of low priority out of state mail was processed within the five business days, also exceeding the target of 90 percent.  This is an increase from 76 percent in FY20.

Percent of failed vehicle inspections due to safety

In FY21, 4 percent of vehicles failed their safety inspections.

Vehicle their expiration, they are considered overdue for their vehicle inspection. APPLUS Technologies, the vendor used in the commonwealth and several other states, was hit by a cyberattack on March 30, 2021, which suspended its inspection stations from operating.  Motorists with existing stickers that expired in March or April were granted until May 31 to get a new inspection

In FY21, an average of 17 percent of vehicles had overdue vehicle inspections.

Percent of citations submitted via e-citation

License suspensions in Massachusetts occur when a driver’s license or right to operate has been suspended or revoked enforcement due to a violation in driving laws. CDL drivers are held to higher standards than passenger drivers and have more disqualifying factors that lead to a license suspension or suspension of operating privileges. For more information on the type of motor vehicle suspensions and CDL suspensions visit mass.gov/RMV

In FY21, there were 91,584 suspended drivers, with 2,381 of those drivers holding CDL licenses. On average 2.6 percent of license suspensions were issued to CDL holders.

Due to the pandemic, the RMV started conducting suspension hearings exclusively over the phone. In FY21, there were 134,338 hearings held at the RMV.

Average Number of Days to close a suspension hearing

The average number of days to close a suspension hearing is calculated by the time from the date a case was opened and when the case was closed.