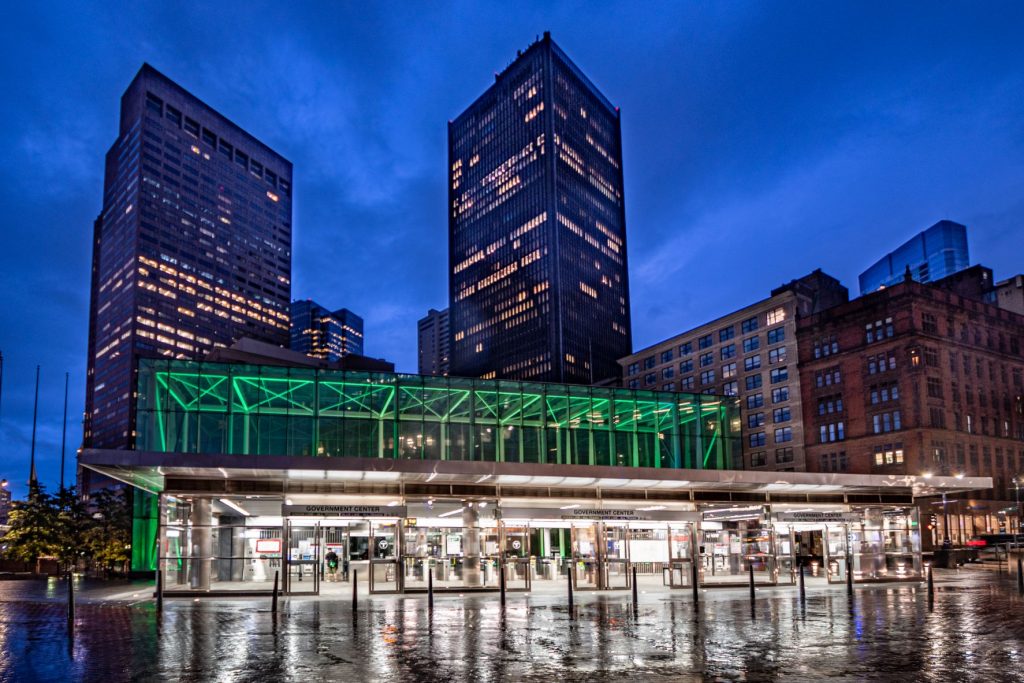 Subway reliability measures the percent of customers who wait no longer than the scheduled amount of time between trains. Further illustration and daily reliability updates can be found on the MBTA Back on Track Dashboard.

Bus reliability measures how often buses depart or arrive within a few minutes of the expected times, depending on the type of bus route. For routes that come every 15 minutes or less (Silver Line and Key Bus routes), reliability is the percent of buses that are no more than 3 minutes later than the scheduled time between buses. For Other Bus services, reliability is the percent of buses that arrive or depart within 6 minutes of the scheduled time. Bus reliability is measured at the beginning and end of each route, and at key stops in between. Further illustration and daily reliability updates can be found on the MBTA Back on Track Dashboard.

Ferry reliability measures the percent of ferry trips that arrive at their final destination no more than 5 minutes later than scheduled. Ferry reliability improved to 99.6 percent in FY21, exceeding the target of 97 percent.

The RIDE reliability measures how promptly passengers are picked up and dropped off—it is the percent of completed trips where customers were picked up no later than 15 minutes after the scheduled pickup time and dropped off no later than 10 minutes after any scheduled appointment time. The RIDE reliability decreased slightly to 91.7 percent in FY21, still exceeding the target of 90 percent.

The ability for all customers to reach a subway, commuter rail, or Silver Line platform depends on whether stations are designed to be accessible. Subway stations are typically accessible using elevators, while accessible commuter rail stations may include elevators or ramps in combination with high or mini-high platforms for level boarding. Surface stops on the Mattapan, Green, and Silver Lines have different accessibility requirements—at times difficult to implement due to challenging geometry of the street, curb, or platform. More information on system-wide accessibility improvements can be found on the MBTA website.

Many stations require elevators to be accessible for riders, meaning that elevator maintenance and unplanned outages can affect the abilities of people to access MBTA services. Elevator uptime measures the percent of total elevator-hours in which elevators are operational. This measure encompasses the elevators at rapid transit and Commuter Rail stations that are owned and maintained by the MBTA. Instances of long-term planned outages in which accessible shuttle alternatives are provided (typically when an elevator is being completely rebuilt) are excluded from the measure.

Elevator uptime for FY21 was 99.5 percent, no change from FY20. Some regular elevator maintenance is required to ensure system safety.

In spring 2021, 100 percent of Green Line train trips were accessible. The Green Line vehicle accessibility measure methodology has been refined since FY20 to reflect closer tracking and more accurate data.

Even though the entire MBTA bus fleet is accessible, customers can still encounter barriers at bus stops due to inaccessible curbs, sidewalks, landing pads, and more. A survey of all bus stops in 2017-2018 identified many accessibility barriers, and to prioritize improvements, stops were grouped into four categories: critical stops (fundamentally inaccessible), high-priority stops (two or more significant access barriers), medium-priority stops (one significant access barrier), and low-priority stops (negligible or no barriers). The MBTA’s Plan for Accessible Transit Infrastructure (PATI) is removing barriers at critical and high-priority bus stops in multiple phases. Since the majority of MBTA bus stops are located on municipal or privately owned sidewalks, PATI also shares collected data with municipalities to help cities and towns remove remaining access barriers. More information on PATI can be found on the MBTA website.

At the end of FY21, there were 242 remaining stops with critical barriers, 654 remaining stops with high-priority barriers, and 214 paired or other priority stops. These remaining 1,100 priority stops comprise around 14 percent of the system’s more than 8,000 total bus stops. The PATI program faced several challenges in FY21, including labor capacity and supply chain issues. The MBTA is currently evaluating increasing contractor capacity to meet program goals.

Regional congestion affects the bus travel time and reliability experienced by MBTA bus riders, and municipal management of streets and signals has a significant impact on bus service. Through partnerships with municipalities and communities in the region, the MBTA has identified key corridors for focused investment in bus priority infrastructure to facilitate fewer delays, faster bus trips, and more reliable and frequent service. Bus transit priority features can include bus lanes or shared bus/bike lanes; transit signal priority (TSP), which gives preference to buses at traffic lights; and queue jumps, which allow buses to bypass waiting traffic with short priority lanes and early green signals. Other features include streetscape and roadway changes, such as curb extensions at bus stops, to make bus movements more efficient.

Transit priority projects have been implemented in several municipalities in Greater Boston, including Arlington, Boston, Cambridge, Chelsea, Everett, Lynn, Malden, Quincy, Roslindale, Somerville, and Watertown. At the end of FY21, a total of 17.7 bus priority miles were active, an increase of nearly 9 miles from 9.8 miles in FY20.