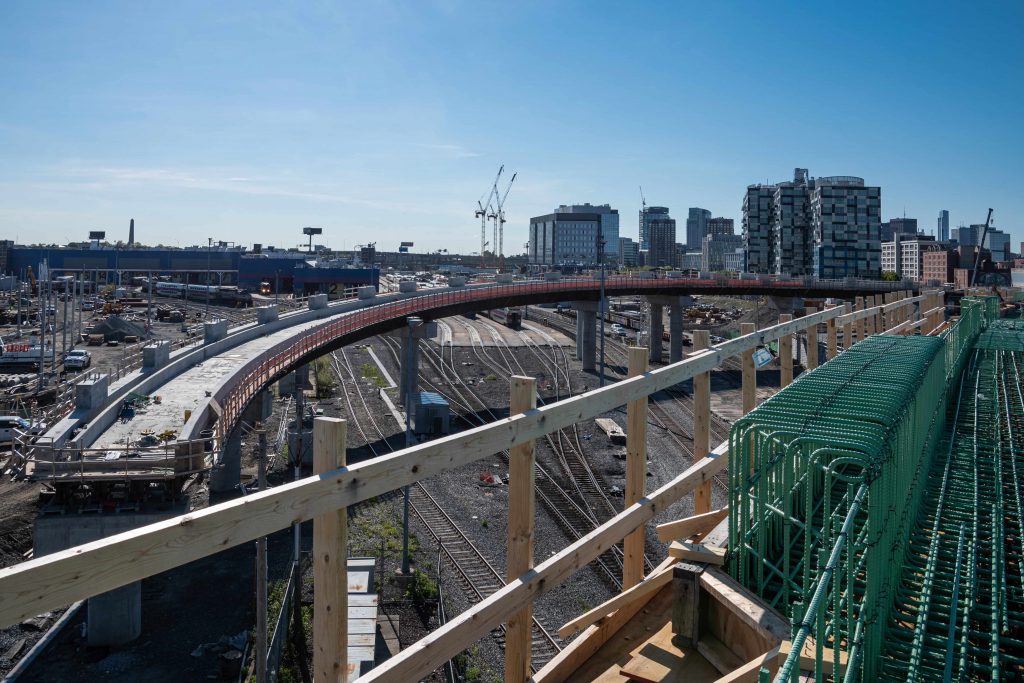 The onset of the COVID-19 pandemic resulted in a steep decline in MBTA ridership, and a significant loss of associated fare revenue. Fare revenue typically funds 40 percent of budgeted costs for departments and operations across the authority. Since March, the MBTA has lost 75 to 90 percent of its monthly fare revenue collection, which can mean over $500 million in lost fare revenues per year. Although a one-time influx of $827 million in federal funding through the CARES Act has mitigated the budget imbalance in the near-term, the MBTA expects to spend the CARES Act funds entirely in FY21 to maintain service and operations. This is anticipated to leave a significant budget gap the following fiscal year, in FY22.

The fare recovery ratio is the revenue received from fares and passes divided by total operational expenses, excluding expenses due to debt. This measures how much of the cost of providing transit services is paid directly by MBTA riders. The FY20 fare recovery ratio was 33.5 percent, a decrease of 9.2 percent from FY19 due to the COVID-19 pandemic.

The drastic drop in MBTA ridership beginning in mid-March 2020 resulted in significantly less fare revenue collected in spring and summer 2020. Because operational expenses did not decrease to the same degree, the fare recovery ratio fell dramatically, reaching as low as 5.4 percent in May 2020. Additionally, fare collection on buses and at surface trolley stops was paused from March 21 to July 20 for operator safety, resulting in further decreases in revenue.

The MBTA Capital Investment Plan (CIP) is a rolling five-year investment program to improve and modernize assets, expand service, and meet strategic priorities and performance goals. The annually updated CIP includes over 400 capital projects working to improve reliability, safety, and accessibility for riders. More information on the current CIP and historical updates by fiscal year can be found on the MBTA website.

CIP spend largely funds projects in two broad categories: projects focused on reliability and modernization, and projects focused on expansion of the MBTA system or MBTA service. Major capital projects currently include the Green Line Extension, the Red Line Transformation and Orange Line Transformation programs, South Coast Rail, and Fare Transformation. Total CIP spend in FY20 increased by over $600 million over FY19, with a total of nearly $1.7 billion spent on capital improvement projects. Of the total, $1.2 billion was spent on reliability and modernization projects, with $481 million spent on expansion. Total capital spend surpassed the CIP goal by 20 percent in FY20, 13 percent higher than the previous year.

This measure tracks the percent of capital projects completed on or under budget. In FY20, 54 percent of all construction contracts were completed on or under budget, and 77 percent were completed within 10 percent of the original budget. Of the projects more than 10 percent over budget, 8 percent were 11 to 20 percent over and 15 percent were more than 21 percent over. Cost increases occur for a variety of reasons, including unforeseen conditions, errors or omissions in design, and scope added to projects when determined to be advantageous. The MBTA’s Capital Programs departments closely track cost performance on projects and are implementing an electronic project management system to improve efficiencies and transparency. Capital Programs maintains a Lessons Learned database and conducts risk workshops prior to bid as cost control measures. The MBTA is also investing in the Capital Programs QA/QC program to improve design quality.

This measure tracks the percent of capital projects that were completed on or under their estimated time. In FY20, 8 percent of completed construction contracts were finished by their initial estimated delivery date, and 54 percent of projects were finished within 120 days of originally scheduled completion, or what is typically considered one construction season. Of projects completed in FY20, 46 percent were more than 120 days over estimated time. Projects are delayed for many reasons, but delays are largely caused by unanticipated field conditions and scope added to projects when determined to be advantageous. To reduce delays, the MBTA identifies and accounts for construction risks early in the development of contract duration, exploring opportunities to complete enabling or early works ahead of construction projects, and working with design and contracting partners to improve the overall timeliness of the capital program.  The MBTA is also implementing a program of exclusive construction access to track and station infrastructure intended to decrease the cost and duration of its construction projects.

Average Elapsed Time Between Advertising and Notice to Proceed (NTP)

When the MBTA advertised a contract to advance a capital project in FY20, it selected a contractor and approved work to begin within 95 days on average, no change from FY19 and longer than the target of 90 days. The measure was averaged over 9 projects moving from advertising to NTP in FY20, significantly fewer than 23 projects in FY19, primarily due to the COVID-19 pandemic.