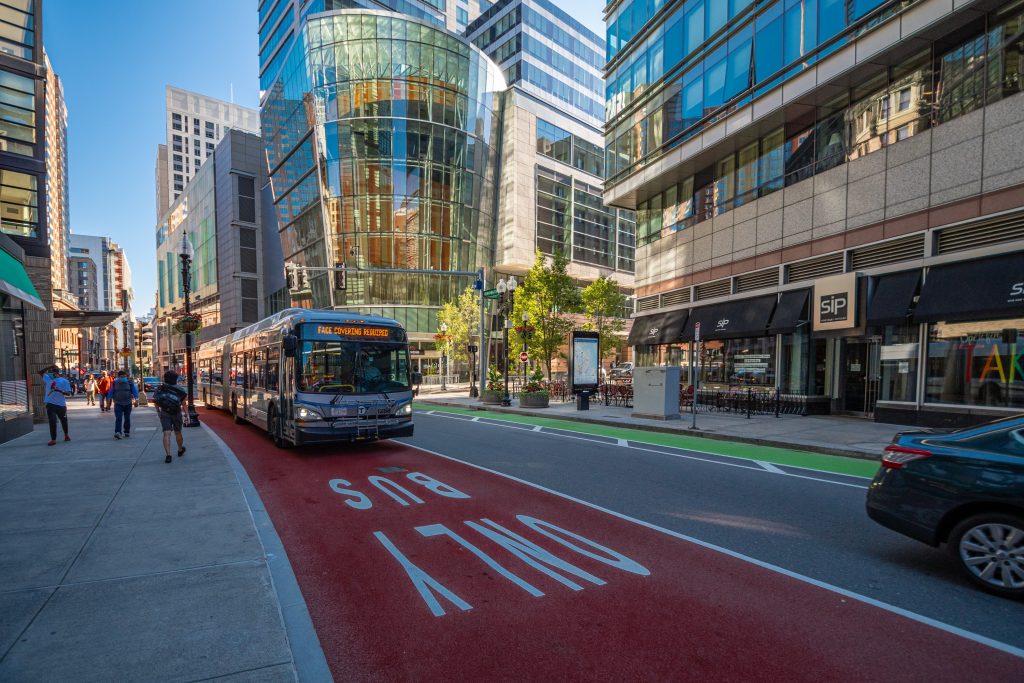 The MBTA’s expansive service and prominent regional position mean it has significant potential to alleviate congestion and mitigate greenhouse gas (GHG) emissions from single-occupancy vehicles through mode shift—trips taken on transit that may have otherwise been taken by car. Measures such as MBTA ridership provide context for mode shift, while GHG emissions reductions and bus electrification efforts work to advance healthy and sustainable transportation in the region. A new electricity procurement contract supplied by 100 percent renewable energy sources went into effect on January 1, 2021. This purchase has resulted in complete avoidance of the 36 percent of the MBTA’s GHG emissions that typically come from electricity usage during the second half of the fiscal year, and is likely a primary cause of decreased MBTA emissions from FY20 to FY21.

Ridership measures the number of rides the MBTA system provides each year. In accordance with industry standard, ridership is measured as unlinked passenger trips (UPT), which reflect each time a passenger boards a transit vehicle. Unlinked passenger trips include estimates for trips that are not directly measured, such as behind-the-gate transfers and trips in which riders do not interact with the fare system. Ridership estimates for FY21 may be adjusted slightly in the future.

Greenhouse gas (GHG) emissions are reported as the MBTA’s total GHG emissions in kilograms of carbon dioxide equivalent (kg CO2e) and as the rate normalized by total unlinked passenger trips (UPT). This measure does not account for GHG savings acquired via mode shift, from trips taken on transit rather than in single-occupancy vehicles, which is estimated to be at least four times larger than net emissions.

A new electricity procurement contract supplied by 100 percent renewable energy sources went into effect on January 1, 2021—as a result, the 36 percent of the MBTA’s GHG emissions that typically come from electricity usage have been avoided. In FY21, the MBTA emitted 287 million kg CO2e, a significant decrease from 355 million kg CO2e in FY20, likely due primarily to the renewable energy purchase. The Commonwealth of Massachusetts aims to reduce GHG emissions by 50 percent by 2050 compared to 2005 levels—the MBTA is on track to meet that goal. The rate of GHG emissions was 2.41 kg CO2e per UPT, an increase from 1.29 in FY20. This increase in the rate of GHG emissions despite the reduction in total emissions is largely due to the significant drop in unlinked passenger trips, the measure denominator, in FY21. Ridership estimates for FY21 may be adjusted slightly in the future.