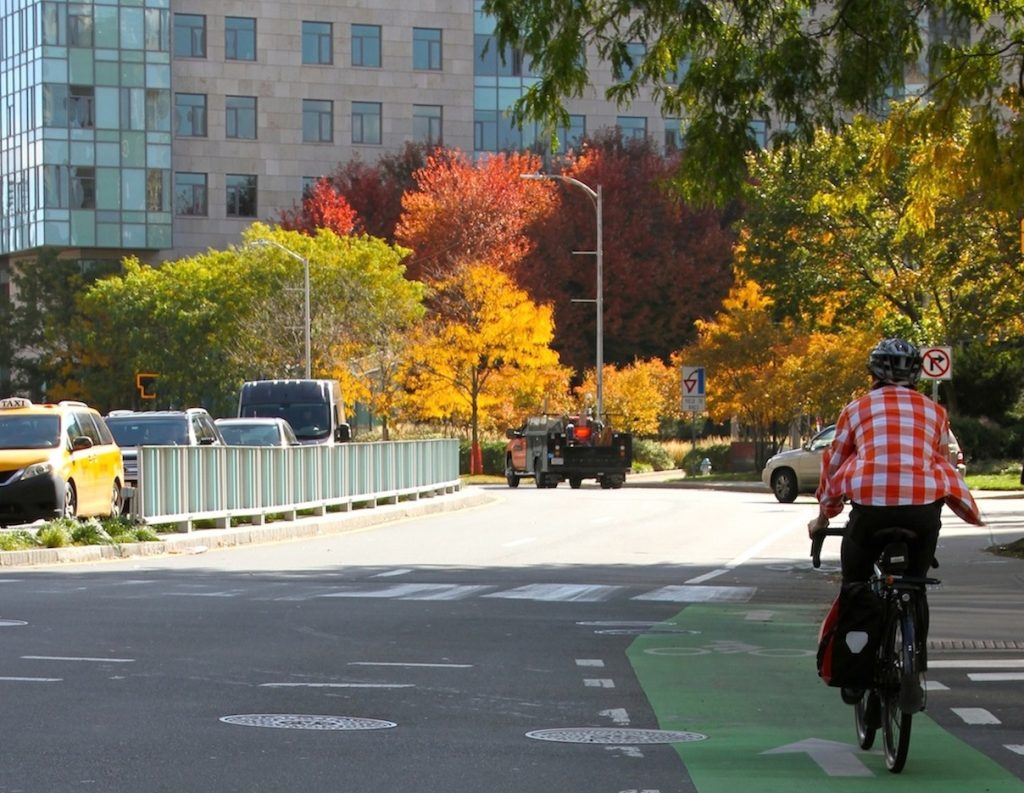 As transportation emissions continue to increase in the state, and across the country, MassDOT is working to find climate solutions that support reductions in emissions.

Vehicles miles traveled (VMT) is a measure of how much people travel by car. While the average daily VMT per capita has remained relatively constant over the past four years, total VMT has increased with the growing economy since 2010 (see MassDOT 2019 Congestion in the Commonwealth Report). After decades of vehicle focused planning and design, travel by automobile is the dominant mode in the Commonwealth, and across the country, and with it comes related externalities such as congestion and environmental impacts like greenhouse gas (GHG) emissions and pollution. The COVID-19 pandemic impacted VMT in the state – VMT decreased significantly during the state shutdown, but in recent months has increased to near pre-pandemic levels, although travel patterns themselves have changed. As concerns about public health continue alongside state reopening, MassDOT is closely tracking VMT.

VMT is the number of miles traveled by motor vehicles in the Commonwealth, calculated per capita, on an average daily basis. The data is obtained from the Office of Transportation Planning (OTP), which derives the information from FHWA Annual Highway Statistics Reports (part of the Federal Highway Administration Performance Monitoring System – HPMS), various HPMS state reports, and U.S. Census Bureau population estimates. Projected figures are based on modeled traffic growth, state population projections, and state and national VMT growth trends.

MassDOT’s target of 24.3 daily vehicle miles per capita is meant to return daily VMT per capita to 2008 levels, when the Global Warming Solutions Act (GWSA) was passed. In FY21, VMT per capita was below the target at 21.5. This was a significant drop from the previous year (25.8 VMT per capita) because of the pandemic and the overall decrease in travel. As the pandemic continues, travel has increased again, and we expect this metric to increase next year again. MassDOT’s goal is for this number to stay below the target to meet GWSA objectives and a combination of telework and investments in transit and active modes may help us to do that.

Equally important to understanding VMT, is understanding the equivalent miles traveled by people on foot and on bicycles. On an average day in Massachusetts, there are just over 7 million (7,028,907) miles traveled by people walking, which is a million mile increase relative to FY20. Additionally, 649,594 miles were traveled on bicycle, an increase of 150,000 miles from FY20. If those trips were taken in a car instead, 6.7 million additional pounds of CO2 would have been emitted in the state. This is equivalent to 660 cars being taken off the road for a year, about 6 months of electricity generated from a wind turbine, or the electricity it takes to power 365 homes for one year.

Complete Streets refers to an approach to transportation policy and infrastructure design that ensures that everyone using streets is safe and feels safe, regardless of age, ability, or mode of travel. The approach, if adopted in all work, will help the Commonwealth meet its mobility and safety performance measures. However, work on state-owned roadways alone is not enough. Cities and towns own 80 percent of roadway miles across the Commonwealth.

At the end of FY21, 276 municipalities throughout the Commonwealth have registered with the Complete Streets Funding Program; 246 local Complete Streets policies have been approved; and 172 construction grants have been awarded. The Program also continues to support municipalities in taking a comprehensive approach to making travel safer and more comfortable for pedestrians, bicyclists, and transit users through new training opportunities.

The MassDOT Highway Division, in partnership with Ameresco, has developed a total of eight solar projects (4292 kW) generating renewable energy. All sites were commissioned under the former Massachusetts incentive program SREC-II, and installed between 2015 and 2018. The largest sites are located along I-90 in Framingham near Exit 10. In FY21 the systems produced approximately 5,300,000 kilowatt hours of electricity, saving approximately 2,320 tons of CO2 emissions.