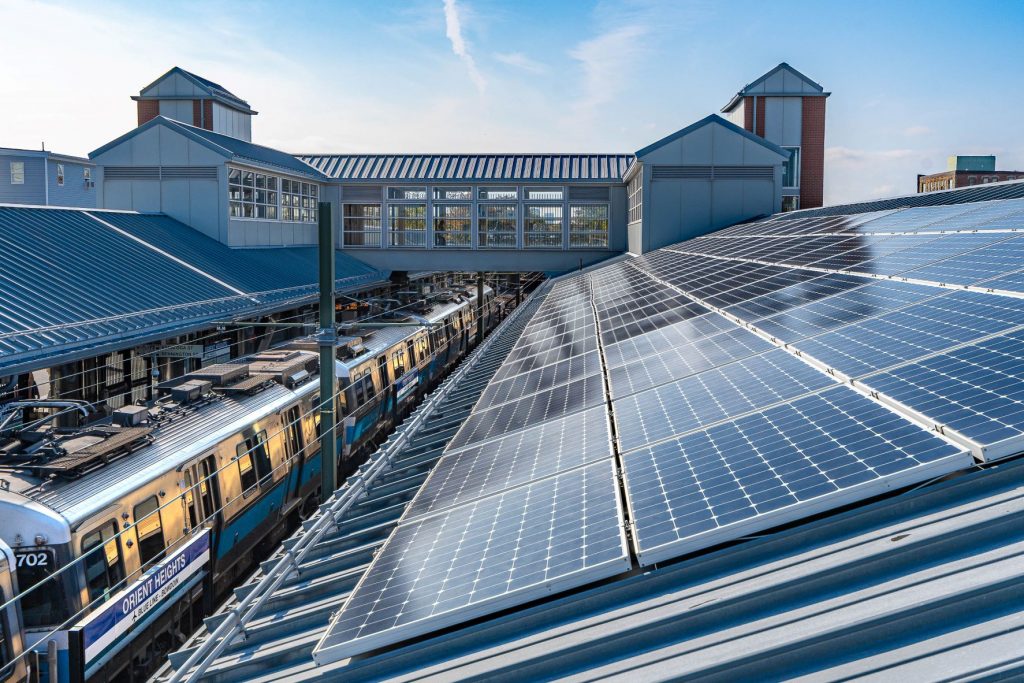 Maintaining Essential Services During the Pandemic

The ongoing COVID-19 pandemic continued to have significant impacts on the MBTA in the 2021 fiscal year, primarily through steep declines in MBTA ridership from pre-pandemic levels, and associated revenue losses that will continue to challenge the MBTA in future fiscal years. During the fall of 2020, with federal funding still uncertain, the MBTA launched its Forging Ahead program to develop a system to guide potential service reductions and gather public feedback on the changes. Central to this process was a guiding framework to ensure that service decisions would be focused on ridership and equity for the many essential workers that continued to use the system.

The framework incorporated two measures: ridership propensity, which included measures of pre-COVID ridership levels along with ridership retention during COVID; and transit criticality, which considered where people in low-income households, people of color, and people in low-vehicle households were making trips. Services which had high ridership propensity and served high transit-critical populations were flagged as essential, prioritized for maintaining service at Service Delivery Policy levels. Services with low values for one or both measures—particularly those with both low ridership propensity and low transit criticality—were considered for service reductions.

Using the transit criticality and ridership propensity metrics, the MBTA was able to prioritize maintaining high-quality transit service for the riders that remained on the system during the pandemic, and those deemed most transit-critical. A map of bus routes classified as “essential” is shown below. 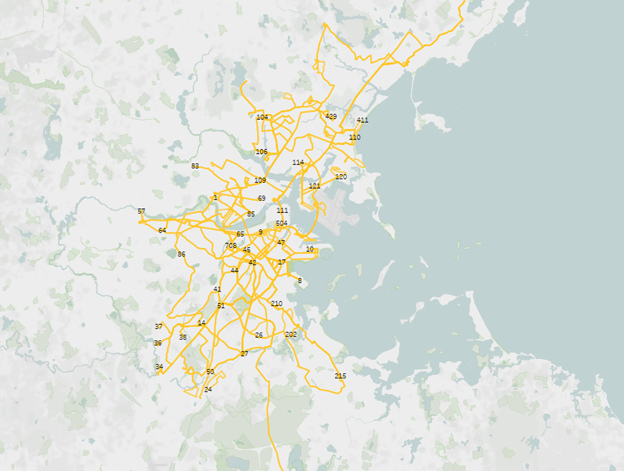 A map of the Greater Boston area with roughly 40 bus route paths shown in orange, with corresponding route numbers. The essential routes cover much of Boston, Hyde Park, Roslindale, Everett, Chelsea, Malden, Cambridge, and Revere, with some routes extending into Somerville, Quincy, and Lynn.

Ridership measures the number of rides the MBTA system provides each year. In accordance with industry standard, ridership is measured as unlinked passenger trips (UPT), which reflect each time a passenger boards a transit vehicle. Unlinked passenger trips include estimates for trips that are not directly measured, such as behind-the-gate transfers and trips in which riders do not interact with the fare system. Ridership estimates for FY21 may be adjusted slightly in the future.

Regional congestion affects the bus travel time and reliability experienced by MBTA bus riders, and municipal management of streets and signals has a significant impact on bus service. Through partnerships with municipalities and communities in the region, the MBTA has identified key corridors for focused investment in bus priority infrastructure to facilitate fewer delays, faster bus trips, and more reliable and frequent service. Bus transit priority features can include bus lanes or shared bus/bike lanes; transit signal priority (TSP), which gives preference to buses at traffic lights; and queue jumps, which allow buses to bypass waiting traffic with short priority lanes and early green signals. Other features include streetscape and roadway changes, such as curb extensions at bus stops, to make bus movements more efficient.

Transit priority projects have been implemented in several municipalities in Greater Boston, including Arlington, Boston, Cambridge, Chelsea, Everett, Lynn, Malden, Quincy, Roslindale, Somerville, and Watertown. At the end of FY21, a total of 17.7 bus priority miles were active, an increase of nearly 9 miles from 9.8 miles in FY20.


Greenhouse gas (GHG) emissions are reported as the MBTA’s total GHG emissions in kilograms of carbon dioxide equivalent (kg CO2e) and as the rate normalized by total unlinked passenger trips (UPT). This measure does not account for GHG savings acquired via mode shift, from trips taken on transit rather than in single-occupancy vehicles, which is estimated to be at least four times larger than net emissions.

A new electricity procurement contract supplied by 100 percent renewable energy sources went into effect on January 1, 2021—as a result, the 36 percent of the MBTA’s GHG emissions that typically come from electricity usage have been avoided. In FY21, the MBTA emitted 287 million kg CO2e, a significant decrease from 355 million kg CO2e in FY20, likely due primarily to the renewable energy purchase. The Commonwealth of Massachusetts aims to reduce GHG emissions by 50 percent by 2050 compared to 2005 levels—the MBTA is on track to meet that goal. The rate of GHG emissions was 2.41 kg CO2e per UPT, an increase from 1.29 in FY20. This increase in the rate of GHG emissions despite the reduction in total emissions is largely due to the significant drop in unlinked passenger trips, the measure denominator, in FY21. Ridership estimates for FY21 may be adjusted slightly in the future.


The fare recovery ratio is the revenue received from fares and passes divided by total operational expenses, excluding expenses due to debt. This measures how much of the cost of providing transit services is paid directly by MBTA riders. The FY21 fare recovery ratio was 10.2 percent, a significant decrease from the pre-pandemic ratio of 42.7 percent in FY19.

The MBTA Capital Investment Plan (CIP) is a rolling five-year investment program to improve and modernize assets, meet strategic priorities and performance goals, and expand service. The annually updated CIP includes over 400 capital projects working to improve reliability, safety, and accessibility for riders. More information on the current CIP and historical updates by fiscal year can be found on the MBTA website.

CIP spend largely funds projects in two broad categories: projects focused on reliability and modernization, and projects focused on expansion of the MBTA system or MBTA service. Major capital projects currently include the Green Line Extension, the Red Line Transformation and Orange Line Transformation programs, South Coast Rail, and Fare Transformation. Total CIP spend in FY21 increased by $250 million over FY20, with a total of $1.93 billion spent on capital improvement projects. Of the total, $1.36 billion was spent on reliability and modernization projects, with $563 million spent on expansion. Total capital spend surpassed the CIP spend target by 10 percent in FY21.

Vehicle derailments are defined as a non-collision event in which one or more wheels of a rail transit vehicle unintentionally leaves the rails. Mainline revenue derailments indicate that the train was accepting passengers when the derailment occurred. Revenue derailments have most frequently occurred as a result of human error. Common issues include improperly setting track switches, failing to ensure switches are properly aligned, and violating red track signals. The Green Line has historically been more susceptible to human error derailments as a result of the diverse travel environments within which Green Line trolleys operate, as well as the fact that several of the automated train and switch controls utilized on heavy rail have yet to be implemented on light rail. The Green Line Train Protection System (GLTPS) has four overlapping phases prior to final implementation and is currently primarily focused on the Equipment Design and Validation Phase. The other three phases include Vehicle Installation, Wayside Installation, and Operational Integration, and are scheduled for completion in 2024. When deployed, the system will reduce the risk of red signal violations, train-to-train collisions, and over-speed derailments by limiting the speed at which the train may operate at specified locations and monitoring the track ahead for obstacles.

Two mainline revenue derailments occurred in 2020, a significant reduction from the eight in 2019. One derailment occurred on the Green Line and was related to human error, while the other occurred on commuter rail and was caused by adverse weather.

Total expenses (not including capital spending) encompass wages and benefits for employees, materials and services involved in providing transit service, contracted transit services like commuter rail and the RIDE, other operating expenses, and debt service. Total expenses grew 1.8 percent from FY20 to $2.16 billion in FY21, while operating expenses grew 0.8 percent. Total expenses in the FY22 budget are $2.35 billion, an increase of 3 percent above the FY21 budget baseline.